New York Fashion Week: the iconic event that unites all fashion professionals, consumers and lovers of the industry – geographically and digitally – in one whirlwind of a week, all to relish in the excitement of designers debuting their latest creations. Once upon a time, NYFW may have only belonged to the fashion elite, but now with digital innovations and the success of social media, any fashion lover can attend via social channels.

After analyzing the four major fashion weeks – New York, London, Milan and Paris – and putting together the Data on the Runway report, we couldn’t help but notice 3 digital trends that have resulted from the undeniable takeover of social media.

In this article you’ll learn…

Influencers: From the Front Row to the Catwalk

Celebrities, influencers and opinion leaders of all kinds are increasingly involved in the international Fashion Weeks, either through collaborations with designers or simply by attending and posting their fave looks from front row. Even old school celebs who were initially against putting their lives on display via Instagram, Twitter or Snapchat have plunged into the sea of hashtags. Thanks to this boom in activity on all social channels, we’re able to track, measure and analyze their participation at each Fashion Week.

New York generated close to two billion interactions on social media during the SS 2018 season, approximately 12% more than Paris, which came second. Even though influencers only created 7% of the posts related to NYFW, they’re responsible for 57% of those two billion interactions! This overall trend is present at all Fashion Weeks and is likely to continue, as experts are predicting that the power of the influencer will only increase in 2018.

An influencer’s ability to engage and attract a wide audience is an increasingly important factor that more and more brands are taking into account for their shows. Whether collaborating with a reality TV star, famous music artist, successful supermodel or a social media star, ultimately it’s about the coverage they’re able to generate for the brand. Oscar de la Renta’s unexpected, yet spot-on collaboration with Nicki Minaj sparked 7.6 million interactions. Talk about a match made in influencer-marketing heaven!

Overall, Nicki Minaj was the top influencer during SS 2018, generating over 11.9 million interactions with just 22 posts. To give you an idea of just how powerful this digital trend was at New York Fashion Week, we’re giving you this sneak-peak of our report listing the top 10 influencers, something to bear in mind for the upcoming season. 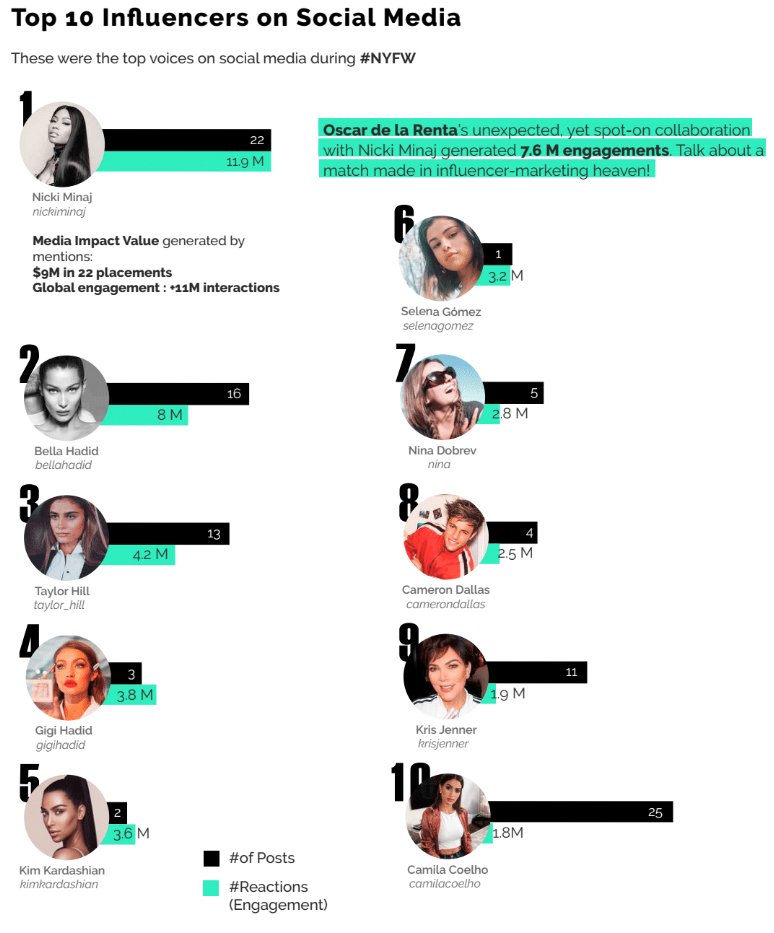 Brands for All: the Democratization of Fashion

Another widespread phenomenon that has become more prevalent in recent Fashion Weeks is the democratization of fashion. As Carlo Capasa, the President of the Camera Nazionale delle Moda Italiana mentioned in our interview, “before there were filters between fashion shows and consumers”; the buyers and traditional media journalists and editors were the only ones that used to get a first glance at collections. Now, thanks to digitalization, consumers can see new collections instantaneously and brands have direct access to the end consumer; this allows brands to build a relationship with consumers without any intermediaries. Therefore, fashion shows are no longer simply presentations of new collections, they are global platforms on which they can build their brand identity and lure new consumers.

Fashion shows are no longer simply presentations of new collections.

Mass market brands are now participating in Fashion Weeks alongside long-standing luxury houses, for example at London Fashion Week Topshop and Tommy Hilfiger accompany Burberry in the top 3 ranking of the most talked about brands in the media.

Further evidence of the democratization of fashion is the coverage by online editorials which are not solely specialized in fashion. AOL, for instance, was the media channel that generated the highest media impact value, approximately $1.9 million. The Daily Mail and Vogue followed closely behind. The fact that a non-fashion publication managed to rank number one for it’s New York Fashion Week coverage only leads us to believe that the general public is increasingly interested in fashion. Digitalization and Internationalization certainly go hand in hand, and this is especially evident when looking at the impact that each Fashion Week caused across the globe. It wasn’t just the American crowd who had their eyes on the catwalks in the Big Apple, consumers in the UK, France, Spain and Italy created a total of 72K posts about #NYFW. Following these top 4, interest was generated internationally from Germany, India and Mexico to Brazil and Australia!

This digital trend is also apparent at the other Fashion Weeks; India, for example, was the third country which posted the most about London Fashion Week.

Here’s another little preview of the report where you can see exactly how much interest these countries showed during #NYFW. If you wish to see the full break down of each Fashion Week, download the report for free.

The Launchmetrics content team is always on the lookout for new trends in the fashion and technology sector. We are geeks with style and lovers of good stories!

Let's talk about it Share with us your experience and opinion on the subjects by filling the form below. Cancel Reply

Women Leaders in Fashion: How Their Roles Are Evolving